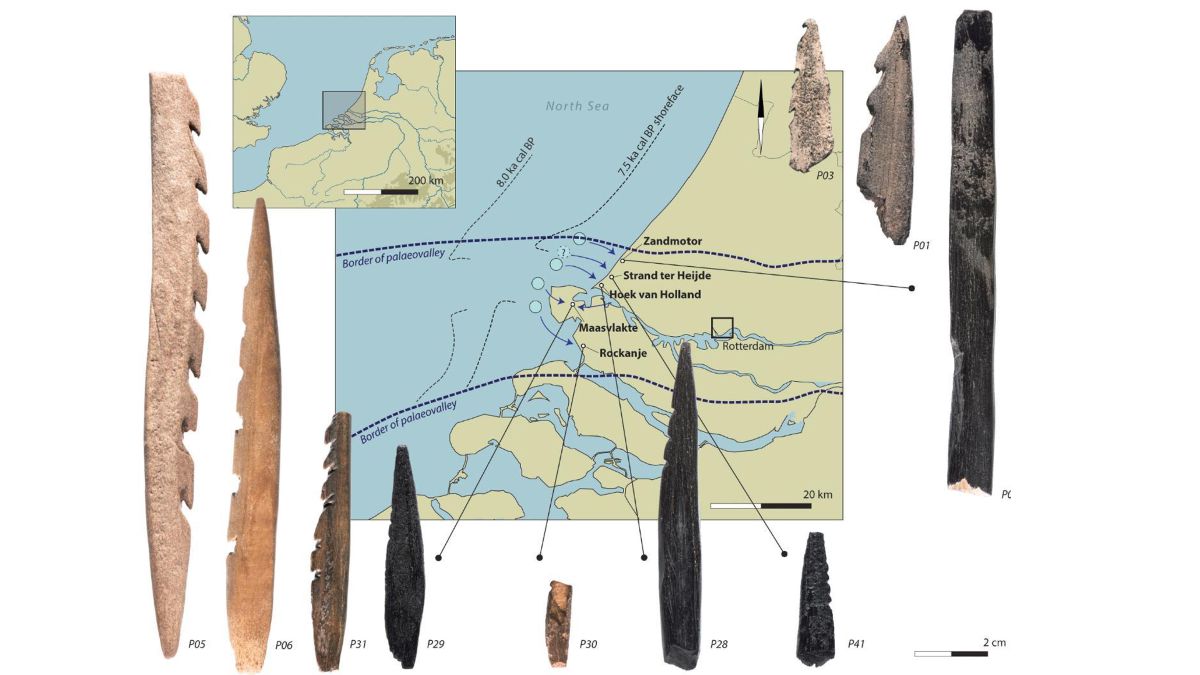 These hunter-gatherers lived in Doggerland, a now an underwater region in the North Sea which connected Europe with Britain. At the end of the last ice age, when the sea level was lower, herds of animals and people lived in it. Although these people have long since disappeared, artifacts from their culture, including bone weapons, are often dumped ashore in the Netherlands.

An analysis of 10 of these bone weapons revealed that eight were carved from red deer (Cervus elaphus) bones and horns, and two are made of human bone. “We expected to find some deer, but people? Even in my wildest dreams, there were no people among them,” lead researcher Joannes Dekker, a master’s student in archeology at Leiden University in the Netherlands, told Live Science.

The secret is why this weapon, known as barbed wire, is carved from human bone. The research team couldn’t think of a practical reason – human bones were probably hard to come by (unlike deer remains), and human bone isn’t a particularly great material for making sharp weapons – deer antlers are much better, Dekker said.

Instead, “there were probably cultural rules about which species to use to produce prickly tops,” he said. “We think it was a conscious choice … [that had to do] with the connotations and associations that people had with them [deceased] people as symbols. “

Nearly 1,000 bone weapons are known from Doggerland, named after the nearby Dogger Bank, a shallow area popular in the Middle Ages among Dutch fishing boats, called doggers. Some of these prickly tops are small, about 9 inches long, but others are longer, the researchers said. The prickly tips could have been thrown like a spear, launched like an arrow from a bow, or pushed down with a spear, Dekker said. Whatever the method, the scars and cracks on their tops show they had high-speed targets, previous research found.

These artifacts have been dumped on the coast in the Netherlands for years, but the number of finds has accelerated over the past few decades when the Dutch began digging the seabed to help strengthen their shores, Dekker added.

Radiocarbon dating revealed that this bone weapon was dated between 11,000 and 8,000 years ago, during the Mesolithic or Middle Stone Age, Dekker and his colleagues found. By analyzing the unique collagen protein in each bone, the team determined the type for each weapon. Finally, by studying variations or isotopes carbon i nitrogen in each of the bones the team learned that, not surprisingly, deer have herbivores, while two people ate animals that lived on land and in fresh water.

Related: Back in the Stone Age: 17 key milestones in Paleolithic life

Dekker noted that his study is small, and only larger analyzes can reveal how often there were human bone weapons in Mesolithic Doggerland. It is also unclear where the anatomical bones came from, but one of the long bones of the leg or arm would probably work best given the size of the weapon, he said.

One thing is clear: these bones were carved soon after a person’s death, because fresh human bones are much easier to cut than dry, brittle ones, Dekker said.

Although “the use of human bone for bone tools is so rare,” it is not unprecedented, Dekker said. Warriors from New Guineafor example, they used daggers made from the bones of a man’s thighs, but only from very important people.

The new study was published in the journal Journal of Archaeological Sciences: Reports.