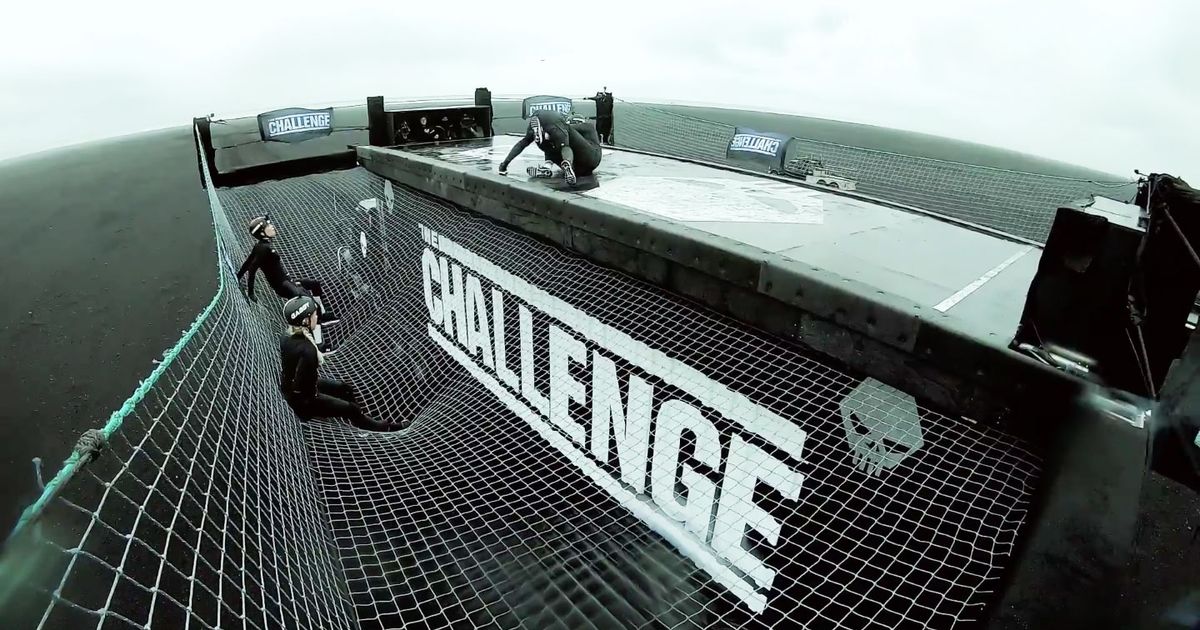 The enemy of the state

I’m sorry to invoke the spirit of Camila Nakagawa in this week’s summary, but I’m overjoyed to have someone fill her short, emotionally fragile shoes and without anti-Blackness! The good reality in the postbravo world is often measured by how many shadows or conspiracies it contains. But nothing exceeds the fun value of an adult who completely loses his shit without any thought or premeditation. And no one wants to remind us of that every time he shows up The challenge him Big Brother 19 winner Josh Martinez. Thank you for your service, Josh. This episode was a roar.

Before we enter the house, a little tidying up: I somehow forgot to mention in the last summary that Kyle stole Kama from Josh, which meant Josh became Nany’s new partner. It’s hard to say how important these switches are given that it’s early in the game and seems to happen often. What we do know, based on the first ten minutes of this episode, is that no matter who her partner is with, she wears pants!

When everyone returns to the house from Crater, Kyle starts attacking Fessy for throwing in. Fessy tells everyone in the room that he could see the house voices and that he knew Kyle was lying about voting for Wes. That doesn’t stop Kyle from repeatedly calling him a cat to the point that everyone watching looks very uncomfortable. There is something in the way Kyle pronounces it with a hard P (and in the world after “WAP”) that feels particularly derogatory. Kam gets into Kyle’s tirade and hits him with an African-American proverb “you won’t do it all.” Kyle holds up in a way I’ve never seen a white man work on this show. Kam is remarkable.

Outside CT and Big T are talking about their new partnership (Big CT, haha). We should be entertained by their unusual dynamics, but none of them are that interesting. In the second scene, Cory in a very calm, daddy’s way (because he’s a dad) tells Fessy that he’s disappointed that he didn’t tell him first about the not-so-secret ballot. Cory seems to think he and Fessy are allies, which I thought. But Fessy dryly replies that he “doesn’t care” and that he’s here to win, which … okay, Fessy, we get it. Like everyone. But maybe you’re not starting to piss off your friends yet? There are three of us in the episode!

We then jump into this week’s surprisingly brutal mission called “Killing on the Road”, for which conceit is very simple. The two teams face off at the top of the semi-trailer at a speed of 50 miles per hour. The goal is to push the opposing team from the side of the truck into a huge net that is, I hope, safe, because no one wears harnesses. Victory is the last person with both feet on the truck. It was hard to follow everything that happened during this challenge, because we are watching two games at once, boys against boys and girls against girls. Significantly, Nicole and Devin go against Kam and Kyle, and Nicole eventually dislocates her shoulder. Prior to this, she says in her interview that she thinks she can beat Kama even though she is “bigger” than her. Ugh. Whites in this show, like Maria Sharapova, always stand out when Blacks are “bigger than them,” even when the difference in size is seemingly insignificant. This is also an awkward set of final words before you are taken away by ambulance.

Another important match is Tori against Liv. Tori puts on that fake voice of a black girl who always works in her interviews when she gets aroused, which makes me bristle. I wouldn’t say Tori absolutely destroys Liv, but she accidentally throws her off the truck in a way that somehow hurts her arm, and the look on Liv’s face when that happens can best be compared to that “Scream” picture. He goes to the hospital he goes to! Fessy and CT eventually go against each other, which makes the other challengers excited. But they are so evenly matched that nothing really happens, and in the end it’s a draw.

Leroy and Kaycee knock the opponent off the truck faster than anyone else and win the challenge. Everyone seems to be pretty happy that they won, which I wonder how many allies they put together. When the players return home, they notice that Nicole has no things in her room because, as we see in the spy footage, she was sent home. Devin doesn’t know what’s going to happen to him, because whether this show has backup players or just sends people without partners home is different every season. He tells us very earnestly to Devin that he must now fight for Nicole, to what is Devin, I suppose? Liv is returning from the hospital and has to wait for his X-rays to see if he has a fracture. She is very calm down because of all this. She tells her group of pals, Big T, Gabby and Amber B., that Tori is not as strong as she thought she was, which feels like a hint.

Next in this episode is Josh. I was trying to figure out if Josh should have a nickname whenever he applied a banana to someone, like Camila-nator. But the bitter tone in which everyone utters his name feels like it’s something of his.

Everyone hangs out in the kitchen / dining room / living room when CT starts insulting Kaycee because of the use of the oven or the way she cooks pizza or the fact that she cooks for too long (I can’t say exactly what the anxious eye is). Regardless, she raises her voice and hovers over her in a way that made me say, oh no. Josh watches it all and goes out to where CT smokes a cigarette and tells him he made Kaycee cry, which, unless cut, isn’t. It is very important to note that the ground outside is wet from the rain and Josh is barefoot. CT goes inside and asks Kaycee if she cried, to which she replies no. But Josh swears up and down that he never said Kaycee was crying and he and CT get into a shout.

Devin, who thinks he has nothing more to lose with his partner’s departure, decides to join the drama and shouts. “Big Brother shit! ”In a way that made me scream. Whether it’s talking about an actual show, which I’ve always considered inconspicuous, or former contestants in the house, most of whom I don’t really care about, I agree! Everyone laughs at this pretty much, except Josh, who somehow ends up outside trying to fight Devin. He’s still barefoot, which drives me crazy. It takes several security guards and Fessy, Kaycee and Jay to keep Josh because he is the one who was provoked. Meanwhile, Devin smokes a cigarette and asks Josh to make basic mathematical equations. Shooting at this already farcical moment on the moon is “So Emotional” by Whitney Houston’s needle. I am so grateful for this music budget.

The next morning, Devin tells Wes that he thinks he will be on the house vote, what, yes. But Wes thinks he can gather enough soldiers to vote in Cory and Torah. At the deliberations, Devin tells everyone they should vote for Cory and Tori, and Tori says, “F you!” Apparently Tori and Devin have had little history since participating in the show Second chance where Devin beat her, but I feel like we’ll see them pretty soon. Wes says he votes for them too. Of course, Josh is still gambling from the night before and continues against Devin who seems to last ten minutes. Josh doesn’t really need to do that, because Devin is an obvious choice because of his status as a lone guard. But Josh is identical without the superego. I think I said that?

Most of the house votes for Devin, except for Liv, Kyle, Us, Wes, Natalie and Devin. It’s hilarious to watch Leroy and Kaycee try to query and analyze this information. Kaycee swears she is intentionally vague because she has a separate alliance with Big Brother crew, but he also seems to honestly not know what’s going on. Before being eliminated, Wes tries to reach an agreement with Leroy because he knows he has been sent. Kam is present, of course, because she and Leroy make all the decisions together. Of course, no Wes begging can save him from being thrown in, because a man simply has nothing to offer at the moment, and everyone knows that.

In the crater, Leroy refuses the opportunity to apply for elimination and sends Wes. Kam seems to have some stake in this decision, saying Leroy needs to “look at the bigger picture”. I’m not sure what the bigger picture is other than getting a skull so you can go to the finals, but I believe they do. Kaycee also votes for Wes.

Anyway, Wes and Devin play a game called “Snapping Point”. Attached to opposite ends of the rope, the two of them have to race through a series of pillars in the zagzag and press the red button to win. The rope isn’t long enough for both of them to reach the button at the same time, so it will inevitably become a game of tug of war. Wes and Devin are close friends, but Devin still seems extremely passionate. Wes is already justifying how hard it will go against his best friend, so we know how this will end.

Honestly, there’s not a lot of competition because Devin stays ahead of Wes all the time, and Wes looks like he’s not even trying? Usually when we see this game, the players are at rest for a significant amount of time. But I feel like it happened in less than 2 minutes. TJ looks disappointed to tell Wes to go home, and Devin is ready to turn the house upside down. So Tori chose his new partner. He behaves irritated in a way that seems excessive. And Cory is happy with his new partner Natalie.

TJ ends the episode by reminding everyone that their ultimate goal is to get a golden skull, of which only seven remain (!!!). Just looking at the number of contestants left without a skull, we know this game will become real.