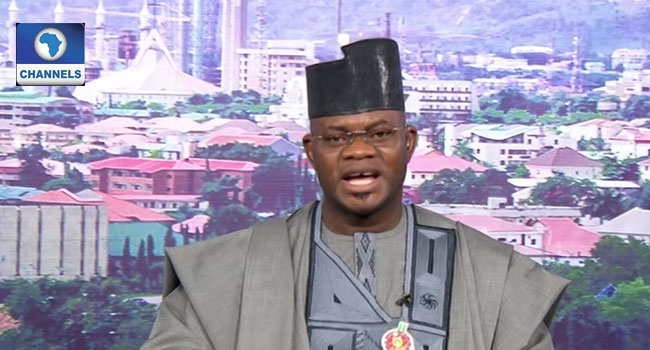 Bello did so on Wednesday during a breakfast interview on Channels Television, Sunrise Daily.

“When politicians start stopping the use of bullies, advertisements or some group of criminals, then we will start to have security and safety,” Bello said.

The governor also stressed that he won the governor’s poll on November 16, 2019 without the use of ‘boys’ or bullies.

According to him, political violence and the use of ‘boys’ during the elections were regular in Kogi before he came to power, but he “refused to play such a dangerous policy”.

“When I boarded, I inherited a state that was divided into several lines. To then strive to be anything political in the state of Kogi, you have to have what we call ‘boys’ or bullies or commercials, and then use it to intimidate people during political betrayals.

“When the political exercise is over, the so-called boys or bullies or pedestrians would be abandoned and left to fend for themselves, and thus they multiply into something else or a monster with a hydra head, which you will not be able to control at the end of the day. In this regard, there are several histories, records and intelligence across the country.

“But I refused to play such a dangerous or unnecessary policy when I boarded the ship. My rise to the service is known to everyone around the world. I immediately chose my path and decided to deal with criminals, regardless of political affiliation, simply using the laws passed by the State House of the Kogi Assembly and the existing security architecture, ”he said.

He boasted that the Kogi state “pursues an open door policy”, widely accepted by residents.

Speaking further about how he was re-elected governor on the platform of the Congress of All Progressives (APC) in 2019, Bello said there is ample evidence to show that he won the election freely

“I won the free elections. The police, DSS, army and all law enforcement agencies have their facts. Don’t listen to the lies that are spreading there. When I see these things, I just laugh and say how I wanted them to come to Kogi State to see for themselves.

“There was no time in my campaign for any of my supporters or followers to get involved in the destruction of billboards, signposts or state government installations, before, during and after the election. I can say this boldly. ”

The governor also spoke about the case of the wife of the leader of the People’s Democratic Party (PDP) of the Wada / Aro Campaign Council, Ochadam Ward, Ms. Acheju Abuh, who was killed by suspected political thugs after the election.

Abuh was burned alive after thugs attacked her house around 2pm and poured gasoline on the building before setting it on fire.

Governor Bello assured that the investigation is still ongoing in connection with the incident and promised to follow the case to the end, adding that the findings will be made public.