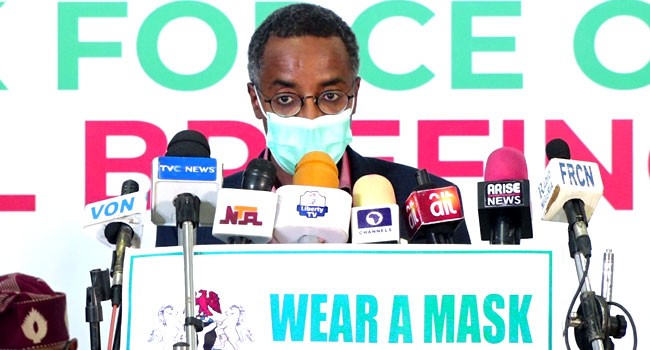 The Presidential Working Group (PTF) for COVID-19 insisted that curfew from 12:00 to 04:00 remain in force amid the second wave of coronavirus in the country.

Dr Sani Aliyu, who is the PTF’s national co-ordinator, said this on Thursday during a press briefing in Abuja.

He also announced new protocols as part of measures to curb the spread of the disease, including the closure of bars and clubs in various parts of the country.

The PTF coordinator called on security agencies to implement protocols on the use of face masks and physical distancing.

He reiterated the directive that civil servants in grades 12 and below should work from home and asked the permanent secretaries in the relevant ministries to carry out the order.

Among other protocols, Aliyu called on state authorities to postpone the resumption of school work until at least January 18, 2021.

He also gave news of what the federal government was doing about a new strain of COVID-19 discovered in the United Kingdom and South Africa.

The PTF coordinator revealed that from Monday next week, all passengers coming from the UK and South Africa will be forced to provide their details on the web portal.

According to him, they will also have to pay for PCR testing upon arrival and must be negative and will be presented with a travel permit before they are allowed to enter Nigeria.

Aliyu noted that a register will also be opened for all passengers from the two countries, and the government will ensure that they take the test after seven days.

He assured that the Federal Government would ensure that those who evade the procedure were taken seriously.

The chairman of the PTF and the secretary of the Federation government (SGF), head Mustapha, also gave news of the pandemic at a press briefing.

Others who reported to reporters were State Minister of Health, Senator Olorunnimbe Mamora and Director General of the Nigerian Center for Disease Control (NCDC), Dr. Chikwe Ihekweazu.