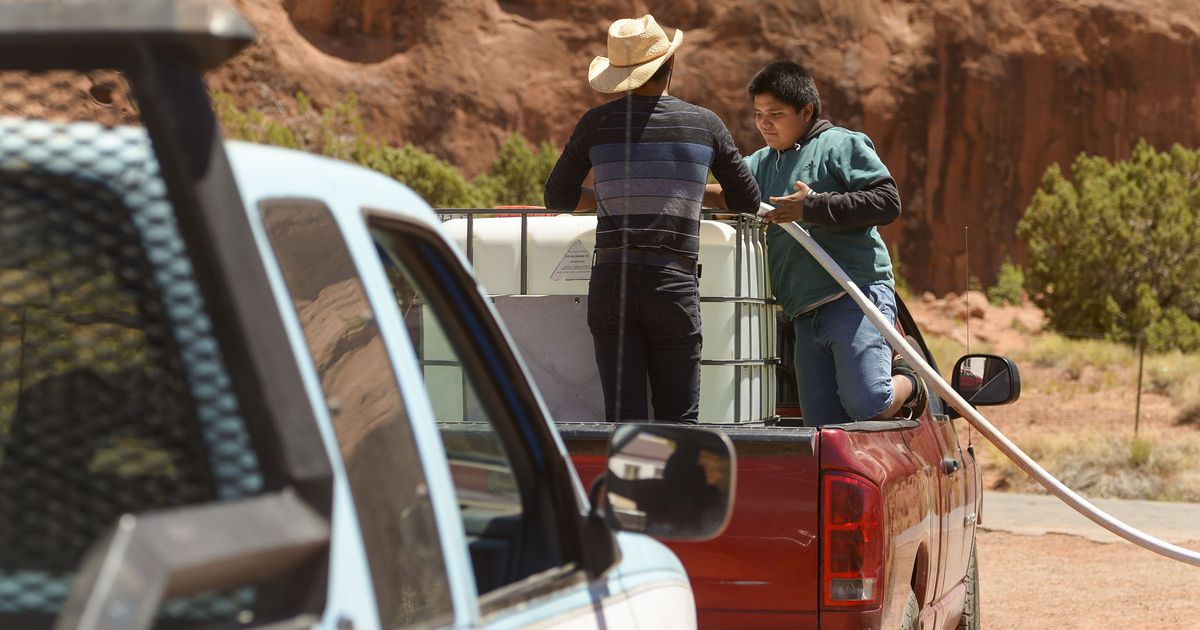 The legislation formalizes tribal water rights in southeastern Utah and provides $ 220 million for the construction of water projects in the Utah Navajo strip.

(Leah Hogsten file photo | Tribune) Two boys fill the family’s water tank at the Oljato-Monument Valley tap adjacent to the post office on June 22, 2020. The water well is one of the few locations in San Juan County where members of the Navajo Nation can get clean water. More than a third of Navajo Nation families do not have running water, and the problem is even worse in San Juan County, where more than 40% of Navajo Nation residents need to transport water. Families fill jars in community wells or buy bottled water in stores – expensive, time-consuming charges that became even more difficult during the pandemic and the tribe’s daily and weekend curfews.

Shortly after COVID-19 was identified in the Navajo Nation in March and its rate of cases per capita surpassed all states in the United States, a common refrain emerged among health workers, tribal leaders and members of Congress: It’s time to finally resolve the water availability issues in the Navajo Nation.
In June, the Senate unanimously passed the Utah Navajo Water Rights Settlement Act, a long-awaited law that aims to do just that for the Utah portion of the reserve. The legislation would recognize the Navajo nation’s right to 81,500 acres of water from the Colorado River basin in Utah – enough to meet the annual needs of some 160,000 typical American families. It would also resolve the tribe’s current and future water rights claims and provide $ 220 million to build much-needed water projects in San Juan County.

Despite his bipartisan move, outgoing President Donald Trump threw the entire funding and aid package into uncertainty on Tuesday night when he harshly criticized it as “wasteful and unnecessary”.

More than 40% of the homes of the Navajo Nation in San Juan County – where tribal water rights have never been formalized – have no running water and many residents have to fill containers with public taps, a time-consuming and expensive process. Others rely on water supplies from nonprofit organizations.

The project, made more urgent by the pandemic, attracted bipartisan support after almost 18 years of negotiations. All members of the Utah delegation to the House of Representatives, three Republicans and one Democrat, co-sponsored him, and the public seemed to support his premise as well.

A June survey by Climate Nexus, in partnership with Yale and George Mason universities, found 84% support for allocating federal dollars to subsidize water projects for the 2 million Americans who currently do not have running water, many of whom live on American Indian reserves. And a study by the Indian Health Service found that every dollar the agency spends on home sanitation facilities achieves at least a twenty-fold return on health benefits.
But months went by and nothing happened. Senator Mitt Romney, R-Utah, and Representative Ben McAdams, D-Utah, issued a joint press release in October urging the House to approve the bill. President of the Navajo Nation, Jonathan Nez, spoke at a conference on water at Colorado Mesa University in November, and worried that if the legislation did not go to a House vote before the end of the year, it could continue to sink in Congress as it has been doing ever since being first introduced by then Sen. Orrin Hatch, R-Utah, in 2016.
On Monday, however, the legislation finally saw life renewed when it was included in the massive Consolidated Appropriations Act of 2021, a $ 2.3 trillion spending account that includes $ 900 billion in coronavirus relief and a package of overhead of $ 1.4 trillion. The legislation is now awaiting Trump’s signature.

“This is truly a milestone for the Navajo people and the state of Utah,” said Nez in a statement on Monday. “For years, Navajo leaders have advocated passing the Navajo Utah Water Rights Agreement Act to provide drinking water for our people who reside in the Utah part of the Navajo Nation. The COVID-19 pandemic punctuated our critical need for more drinking water resources to keep our people safe and healthy. “

(Courtesy of the Navajo Tribal Utility Authority) More than 40% of Navajo Nation homes in Utah have no running water. The legislation passed by Congress on Monday would earmark $ 220 million for water projects in the Utah Navajo strip.

“The legislation passed today includes several measures that I have been fighting for that are important to Utah,” said Romney in a statement. “The Navajo nation, which faces one of the country’s highest COVID infection rates, will finally have access to running water.”

“It is a long time since the Navajo Water Rights Agreement was signed into law,” said Curtis, who represents San Juan County, in a statement. “This widely supported settlement will bring vital water infrastructure to Utah’s part of the Navajo Nation and bring certainty to water rights in the region. I appreciate Senator Romney’s leadership in helping to bring this important legislation to the finish line. “

The project’s approval was also praised by conservation groups, including Trout Unlimited.

Woody Lee, executive director of Utah Diné Bikéyah, called the passing of the legislation “one of the brightest moments in this unprecedented year of uncertainty.”

“Water is healing for all beings placed on earth, according to Diné teachings,” he said. “This is a historic moment when the Diné people and the state of Utah came together to recognize indigenous rights to water. This human right to access water is long overdue. The Utah Navajo Water Rights Agreement will now be a catalyst for improving the health and well-being of indigenous peoples. ”

“I have been meeting with grassroots and water technicians for several years and I know there is a great need for water,” said Maryboy. “Every family in the Utah part of the reserve deserves clean, safe drinking water.”

Although the $ 220 million appropriated by the bill provided a significant boost to building water projects, James Adakai, president of Chapter Oljato and manager of the Navajo Nation’s Project Management Department, told The Salt Lake Tribune this summer that may not be enough to completely resolve what he called a “water crisis” in the Utah Navajo range.

“This is a big project, running water lines maybe 20 to 40 miles for very remote communities,” said Adakai. “Taking the line to the house, the drainage fields, the septic tanks, the internal plumbing work, the cost of pumping stations, water storage tanks, treatment plants – all construction costs, labor, materials and supplies – add up. ”

Zak Podmore is a Report for America member of the body and writes about conflict and change in San Juan County for The Salt Lake Tribune. Your donation to match our RFA scholarship helps keep you writing stories like this; consider making a tax-deductible donation of any amount today by clicking on here.