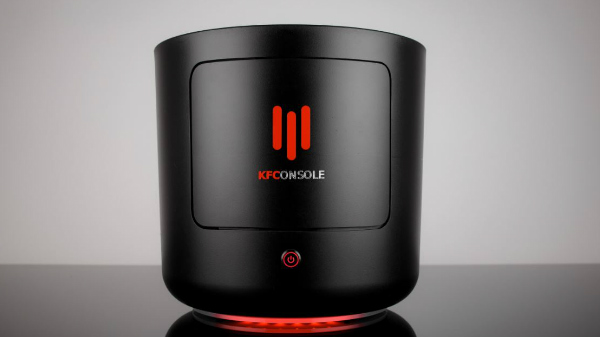 Kentucky Fried Chicken AKA KFC is a brand we all associate with fried chicken. Did you know that, like Sony and Microsoft, KFC has launched a new gaming console this holiday season? Here is everything you need to know about, probably the most interesting gaming console in the world.

The KFC Console or Kfconsole is a unique game console with a built-in chicken chamber. So you can play games while eating hot and juicy chicken at the same time.

Although Kfconsole is a food brand product, the game components that drive the aspect of games were designed by Cooler Master. Kfconsole uses a custom chassis – the Cooler Master NC100 chassis based on the Intel Nuc 9 Extreme Compute Element.

It comes with a replaceable GPU chamber and uses a 9th generation Intel Core i9 processor. For the graphics card, the company teamed up with Asus to make a GPU that is compact but powerful.

Even when it comes to storage, Kfconsole has partnered with Seagate to offer a 2TB SSD storage solution based on Seagate BarraCuda SSDs, offering the best game load time and OS load time.

Kfconsole is capable of handling real-time air monitoring. Similarly, it can also support VR games. Not only that, Kfconsole can also offer gaming up to 240 fps in selected titles with a maximum refresh rate of 4K resolution.

For now, there is no information on prices or availability of the KFC Gaming Console or Kfconsole. Since this is a promotional product, the company is likely to produce it in limited numbers and is likely to share it with content creators and bloggers.

The best cell phones in India

You have already subscribed