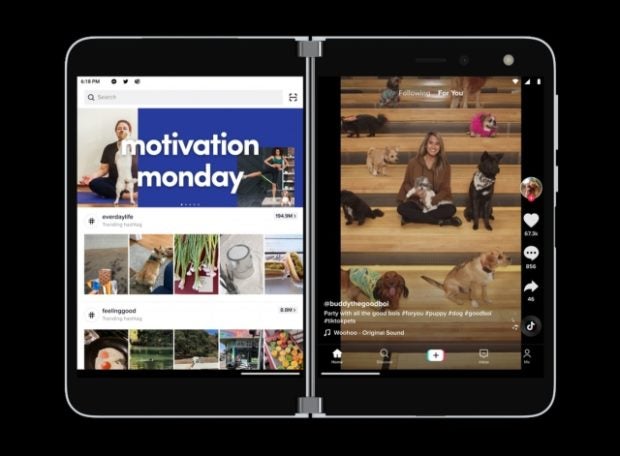 The enhanced TikTok app for Microsoft’s Surface Duo is available through the Google Play Store in the US. Image: Courtesy of Microsoft via AFP Relaxnews.

Microsoft and TikTok join forces. The Chinese social network has launched an improved version of its app tailored to Microsoft’s new Surface Duo smartphone, now based in the United States and coming to Canada, the United Kingdom, Germany and France in early 2021. Could this be a good way to reach consumers who don’t can I get enough platforms to share videos?

“We look forward to sharing that TikTok has released an improved app that brings a whole new experience that is highlighted on the Surface Duo,” Microsoft said in a blog post.

The most downloaded app in 2020 is based on the design of Microsoft’s new smartphone, the Surface Duo, to take advantage of its two screens.

“Optimized for two screens, you can discover videos tailored to you, while exploring relevant hashtags, the latest trends and more,” according to a blog post.

The now-enhanced TikTok app for the Surface Duo, now in the U.S., allows users to see the “For You” feed on one screen while browsing videos on another. It is an important partnership for the two companies, given the huge success of TikTok – which flourished in 2020 – and extensive use of smartphones, prompted by orders to stay at home around the world to stop the spread of COVID-19.

Prior to TikTok, Amazon Kindle and Spotify also improved their apps for a better user experience on the Surface Duo, Microsoft said. Note that Microsoft tried to buy US TikTok operations a few months back after the US government threatened to ban the Chinese social network in the US

Microsoft also announced that it will launch the Surface Duo smartphone in early 2021 in Canada, the UK, Germany and France, although the company has not given exact release dates. CC

This year on TikTok: Community celebration and videos that brought Filipinos together in 2020