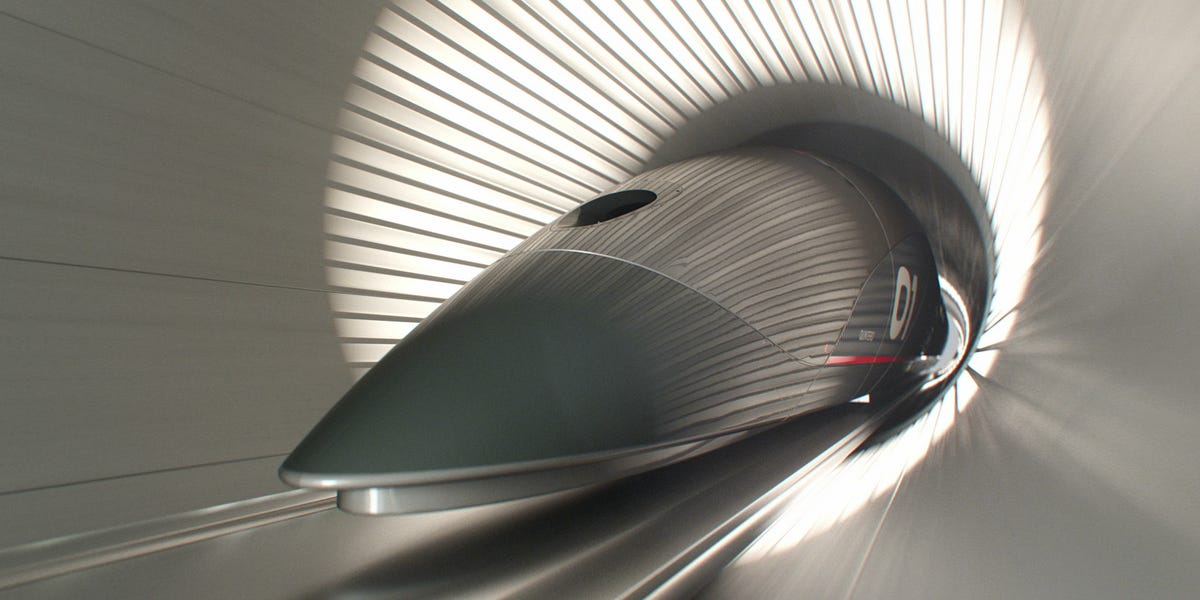 The following is a transcript of the video.

Storyteller: This is the future of high-speed transport. It’s 3 1/2 times faster than Japan’s Shinkansen bullet trains and even faster than a Boeing 747. It’s a hyperloop – magnetic capsules levitating in a tube at more than 1,000 kilometers per hour. In theory, you could get from Los Angeles to San Francisco in just 45 minutes with less than $ 100 one-way tickets. This technology can make it a norm to work and live in two different cities, while creating a world with less congestion and pollution.

Storyteller: And with a successful human test in November 2020, we could be less than 10 years from that becoming a reality. The hyperloop concept became widely popular in 2013 thanks to Elon Musk’s 58-page “Hyperloop Alpha” article that outlined the concept’s design, cost and security. But the technology to bring everything together commercially has only been improved recently, namely, magnetic levitation, or maglev.

Maglev is basically what allows a hyperloop to go incredibly fast, thanks to the lack of friction between the passenger transport pods and the tube-shaped rails. The general concept is simple. The magnets that line the bottom of the pod repel the material in the tube, levitating the pod as it runs.

Giegel: As an engineer, I am always very excited to talk about magnetic levitation, electromagnetic propulsion.

Storyteller: This is Josh, a mechanical engineer who has worked at SpaceX. He is now the co-founder and CTO of Virgin Hyperloop. And this is Chuck. He is the chief engineer for a different hyperloop company, Hyperloop Transportation Technologies. Both are currently developing the best combination of magnets to create the smoothest possible path, using either passive or active maglev.

Passive maglev uses permanent magnets in a specific configuration to create a constant magnetic current that levitates the cocoon, similar to the magnets you used to play with as a child. The active maglev uses a combination of permanent magnets and electromagnets, the latter that can manipulate the electric current and the strength of that current.

Giegel: Basically, if I get too close, I drive to one side. If I go too far, I add some strength. And then you can think of it as a balance. And if there are bumps on the track, if there is all of that, I have a system that basically uses an active control system to make the ride smooth.

Storyteller: And while you may think that this sounds similar to existing maglev trains, the hyperloop concept removes a key element that holds back many trains and planes: air resistance.

Giegel: So if you ever put your hand out of the window when driving a car, imagine if there is really no air there. You really wouldn’t feel that force pushing your hand away. And the same thing can be said for the hyperloop.

Storyteller: This is where vacuum pumps come in handy. Both companies are installing pumps along the pipe. For HyperloopTT …

Chuck Michael: The vacuum pumps in our case are developed by Leybold, who invented vacuum pumps about 150 years ago. Therefore, they have a lot of experience.

Storyteller: These pumps, located every 10 kilometers, would theoretically suck 99.9% of the air between the capsule and the tube. Removing air resistance can make a difference of about 800 kilometers per hour.

Michael: Theoretically, you could go even faster than the speed of sound, but that’s playing with some fun things that we’ll do later.

Storyteller: It will take a little longer before we become supersonic, however. First, companies need to prove that the technology is safe, which is why this scenario is so important.

Luchian: That was so good!

Giegel: You felt a little forced back in your seat. You really couldn’t even notice the levitation. Like, you didn’t realize you got it. But what you noticed is that there was no such irregularity. The camera didn’t do it justice, because the camera was bouncing a little bit more than we did. And it was a little more like a pillow or, like, a pillow-like feeling. You could process everything that was going on around you. You are basically sailing and floating on an idea that was nothing more than something on a piece of paper not too long ago.

Storyteller: While the tour proves your safety, the company wants to work more on the experience. And the actual hyperloop will also be much larger, with a capacity for 28 or more passengers and a capacity to handle 30,000 passengers per hour. But to get to this point, there will be more testing involved for both companies.

Michael: Many things need to happen between now and then. The construction of the hyperloop, the route is one thing. Integration with broadcasters is another, and this requires partnership with communities.

Storyteller: And HyperloopTT is currently under construction to build and test a life-size project in Abu Dhabi. His first potential project in the US goes from Chicago to Cleveland. Virgin Hyperloop will build its new certification test facility in West Virginia in 2022, including a 9,600 meter runway to be used for testing and establishing regulatory and safety guidelines.

Giegel: Around 2025, we intend to certify a fleet of vehicles, of 28 passenger vehicles.

Storyteller: Virgin Hyperloop has plans in Dubai, India and more, with state plans for the Midwest, North Carolina and Texas. But both US projects will not be completed until around 2030. Which may seem like a long time, but the planes took about 16 years to actually get into operation, and the first high-speed train in Japan took at least a decade of development. So about 15 years for a hyperloop doesn’t seem that far away. After all…

Giegel: How can we be a 22nd century country when we are built on 19th century technology, on the 20th century? A single hyperloop lane can make more than 30,000 passengers an hour. What are you going to invest in? What should you invest in to be able to meet future demand, future needs that you have? A change is possible if we choose to embrace it.