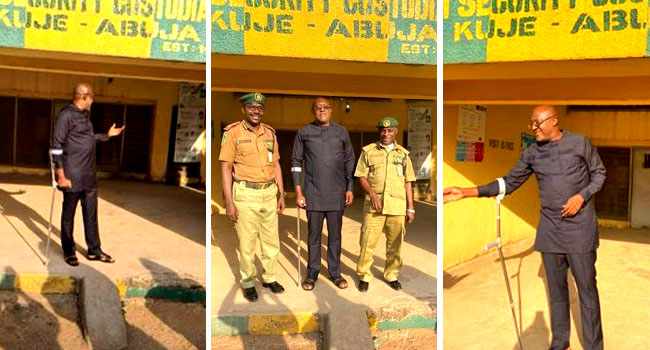 Former National Secretary for the Promotion of the People’s Democratic Party (PDP), Olisa Metuh, has been released from prison after serving about 10 months in prison.

Pictures of Mr. Metuha, who is leaving Nigeria’s Central Security Prison Center, Kuje in Abuja, the state capital, was shared on Twitter by the head of the PDP, Mr. Ayodele Fayose.

Fayose, who immediately passed the governor of the state of Ekiti, congratulated the former spokeswoman of the opposition party, saying, “Welcome home Olisa Metuh, hard times do not last …”

Metuha was prosecuted by the Economic and Financial Crime Commission (EFCC), along with his company Destra Investment Limited, before Judge Okon Abang of the Federal High Court in Abuja.

He is accused of seven counts of illegally receiving money in the amount of N400 million from the office of the National Security Adviser (NSA), under Colonel Samba Dasuki.

On February 25, 2020, Justice Abang sentenced and sentenced the former PDP spokesman to seven years in prison.

Dissatisfied with the court’s decision, Metah appealed to the Abuja Division of the Court of Appeals with a request to annul the lower court’s judgment.

In his argument, among other things, he claimed that the judge in the proceedings was biased and did not allow him a fair hearing.

Approximately 10 months after the judgment of the Federal High Court, the Court of Appeal agreed with the appellant that the judge was biased and quashed the judgment.

In a verdict handed down Wednesday last week, a panel of three judges, led by Justice Stephen Adah, ordered a retrial.

After reviewing the appellate court’s verdict, the EFCC said it would turn to the Supreme Court to challenge it.

A week after the appellate court handed down the verdict, Metuh was released from a correctional facility in Kuja, Abuja.