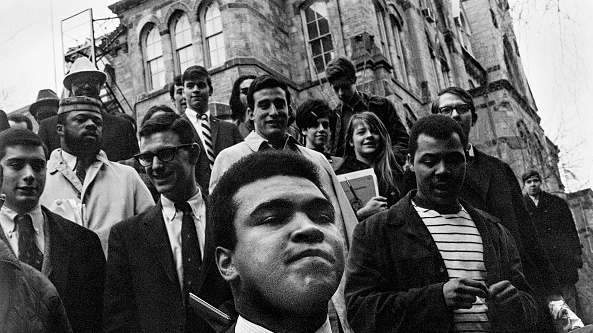 Nine days before Christmas, 1968. On his way to Dade County Jail, Muhammad Ali insisted they stop at Sonny Armbrister’s barber shop, one of his favorite places, since he first came to Miami as a teenage baby Cassius Clay back in 1960.

The owner greeted him at the door and suddenly a crowd of new customers followed him from the street. “Let me serve a few days for you, champion!” shouted one man. In the corner, his lawyer, Henry Arrington, worried and looked nervously at his watch. They were already late according to schedule.

In front of the prison, fans gathered to watch their hero, and journalists came to write a story about a fighter who was deprived of the title that will spend the holiday season in poker. Wearing a white turtleneck sweater and dark striped trousers, Ali paused to sign autographs and give the inevitable, impromptu press conference. Only to arrange it for a meeting with the authorities later.

“Going to jail might come in handy,” he said. “I have never suffered. I have never been limited or experienced the loneliness and suffering of some of my fellow blacks. This will give me an understanding of how they feel. Also, I may have to set aside time for that thing with the military (then appealing a five-year sentence for refusing to fight in Vietnam) and this could be good fitness. “

Nineteen months earlier, Robert Elliot, a police officer with a motorcycle, had noticed Ali driving his gray Cadillac along the city’s airport highway and remembered that the boxer had not appeared in court when he had booked it for an improper turn the previous year. Pulling it again, he discovered that Ali, a notoriously bad driver, did not have a valid license, and his full-time driver was actually sitting in the passenger seat.

That was the official reason he went to jail. Some prayed to be different.

“He was convicted for being Cassius Clay,” Arrington said, deliberately using Ali’s birth name which was still used by many newspapers to convey the story. “Everyone is gripped by the hysteria of Clay hatred.”

As he finally surrendered to begin the ten-day sentence, someone pressed two pencils into Ali’s hand in case he needed them for autographs or writing poetry. He patted the bars on the powerful electronic gate that blocked his path and abruptly asked, “So this is what a prison is, huh?” Placing him in a cell with eight other men, Sergeant Gene Phillips, the reservation officer, asked if he wanted to work in the kitchen, laundry, or as a janitor. Turning the 16-stone scale over, he chose the one closest to the food.

“I would steal chicken legs, put them in my pocket and wrap them,” Ali said. “The boys would help me too, and I would go back to my room and eat that chicken. And then the next day I had to hide the bones to take them there and throw them in the trash. “

Twenty-one months of forced exile from boxing for refusing to be included in the draft, Ali wore prison clothes, a white T-shirt and gray pants, and put in his pocket 40 cents a week for work from 10 a.m. to 7 p.m., washing dishes, filling trays and shipping food. In the evenings, he held Muslim prayers and lectures on black pride in his cell, and while prison guards considered him a hilarious figure, some of the white prisoners were not fans.

“True equality is practiced in prison,” Ali told John Crittenden, sports editor of The Miami News, who was brought to see him at work in the kitchen for three days. They say to me, ‘Man, clean the tray!’ And you see that white man sitting there? They tell him the same thing. They call him a boy. The only real equality is in prison … and in the cemetery. “

But he hurried to do his time because Champburger, the first of what he hoped would become a fast food chain, was due to open at 62nd Street in Miami on Dec. 28. With the idea of ​​locating themselves in predominantly black neighborhoods and empowering African-American franchisees, investors brought Ali by offering him six percent of the company.

Although he repeatedly mentioned this alleged rival to McDonald’s reporters who reported on his arrival at the jail, his budding corporate portfolio was soon out of his mind.

“Every day you wake up looking at the bars and those sad little hallways,” Ali said. “I couldn’t see outside. And then you start thinking how can I get out of here? I can’t be that smart, to look at these bars! I know I can get away with it if I can get away with it. Let me look over the wall. But I can’t !! Then you say, ‘I can’t get out of here, there’s no damn way!’ “

On December 23, according to the annual tradition, prisoners serving traffic fines and other minor offenses were released early as part of the Christmas amnesty. Fifty people came out of Dade County Jail that morning. Only one was greeted by a driver’s limousine with his wife Belinda in the back.