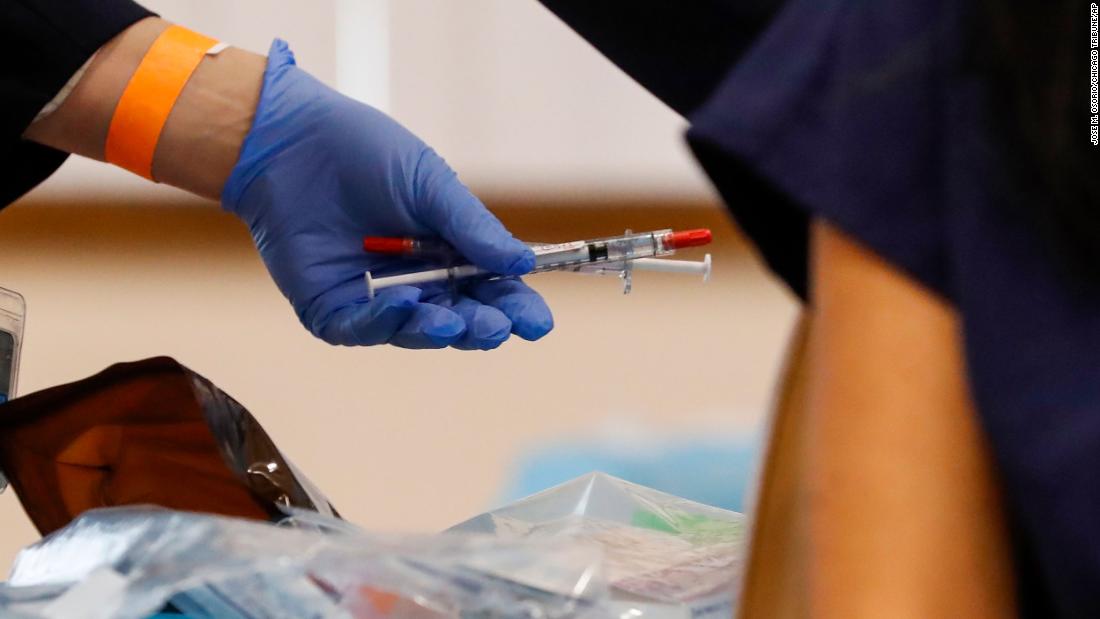 But after the first week of vaccine distribution and with only nine days remaining to meet the self-imposed deadline, Operation Warp Speed ​​is on track to fall well short of 20 million shots. A count, from the US Centers for Disease Control and Prevention, shows that about 9.5 million doses were distributed on Wednesday morning and just over one million people were vaccinated – not even close to the 20 million target of Warp Speed ​​originally defined.

US Health and Human Services and CDC officials say the agency’s counts are underestimating many vaccinations due to data delays, but even considering the delays in reporting, the US vaccination program appears to be taking longer than the Warp Speed ​​employees designed it.

An initial hurdle: a two-day requirement by the U.S. Food and Drug Administration to evaluate each shipment of vaccine for quality control has delayed delivery. The states were told by the OWS to expect fewer doses in the second week than originally planned. With the 20 million figure looking further out of reach, OWS officials acknowledged on Monday that they may not be there until January.

“We still strongly believe that we will have allocated to the states by the end of the year 20 million doses of the vaccine that will be available,” said General Gustave Perna, operational director of Operation Warp Speed ​​during the call on Monday. “We are confident that we will distribute the final part of this vaccine no later than the first week of January so that everyone has access.”

An HHS official said that nearly 16 million doses have already been allocated to requests from states and jurisdictions. But, as more doses of vaccine become available, both Operation Warp Speed ​​and the state and health partners receiving the vaccine will also need to be able to expand the complicated distribution and logistics required to obtain vaccines from point A to point B.

“It seems that reaching 20 million at the beginning of the year is ambitious,” said Dr. Marcus Plescia, medical director of the Association of State and Territorial Health Officers.

Still, “people seem really encouraged about how the vaccines are going,” added Plescia. “Everyone seems to feel that they are using the supply they have.”

The vaccination effort is almost certainly moving faster than the low numbers revealed by the CDC data. In addition to launching new vaccination programs, states are also struggling with new vaccination reporting tools, causing data delays. The latest figures also do not include most of the larger vaccination efforts that are just beginning this week at long-term care facilities.

CDC distribution data has started to include the Moderna vaccine, which was launched this week at more than 3,500 locations, but CDC data does not yet include the number of Moderna vaccines administered. Although the CDC plans to update the data regularly, daily updates are not scheduled to begin until 2021.

Some states, like Michigan, are reporting their own data, but reporting at the state level is also behind schedule.

Michigan Department of Health and Human Services public information officer Lynn Sutfin pointed out that the state panel is not updated in real time and providers have up to 24 hours to load their administered doses into the vaccine registry.

“These doses are being distributed under state instructions to the American people as quickly as they are available and release, and the rapid availability and distribution of so many doses – with 20 million doses expected to be delivered just 18 days after the first vaccine received. emergency use authorization – is proof of the success of Operation Warp Speed, “Pratt said in a statement to CNN.

‘We haven’t started yet’

In addition to states recalibrating the reality that they will receive fewer doses of Pfizer’s Covid-19 vaccine than initially promised in the coming weeks, they are struggling to ensure that each dose they receive is administered in a timely manner.

Although vaccines have been sent to all states, vaccinations are only beginning in some areas. Mayor Nan Whaley of Dayton, Ohio, said on CNN on Tuesday that her city had not yet started administering vaccines, although vaccines started in Ohio on December 14.

“To date, we have not yet started distributing the vaccine in Dayton,” said Whaley on Tuesday, adding that Christmas Eve will be the first day that someone from Dayton will receive the vaccine.

“We are not a big city that gets these assets quickly. We have already talked about this, as the tests were very slow in communities like Dayton and across the country, and I am concerned that the distribution of the vaccine is also slow, ”she added.

Although all states have data on the number of people vaccinated, only 23 states have publicly released this information, a Johns Hopkins University survey revealed.

The CDC and state numbers are not a real-time reflection of vaccinations taking place at the site, but raise questions about how states are ensuring that their total supply is used efficiently. The interval between doses received and doses administered begins to become even more frightening when considering that each state is scheduled to receive more doses of Pfizer and first-round doses of Moderna this week; in many cases, delivery of doses from the first week has not yet been fully administered.

In Michigan, where the state’s Covid-19 vaccine panel shows that only 26,737 doses of the vaccine were administered out of the 84,000 doses sent to the state last week, Sutfin said the delay in shipments and the delay in data updates explain the discrepancy.

“Although Michigan received more than 84,000 doses last week, not all were received on the same day. The vaccine is being delivered daily to local hospitals and health departments across the state. As they understand more about operations and the flow of the clinic, we wait for the time from receipt to administration to decrease, “Sutfin told CNN.

Sutfin also pointed out that the process of unpacking, inventorying, defrosting and coordinating each dose of the vaccine “takes some time, so it is expected that at any time there will be a difference between the vaccine received and the doses administered”.

Florida Hospital Association President and CEO Mary Mayhew told CNN that reconfiguring the clinical space in a socially detached manner and allocating staff to administer the vaccine explain why the initial number of vaccinated people does not match the vaccine supply available.

“I am confident that hospitals are efficiently and effectively deploying essential resources to support urgent vaccine administration for the frontline health team,” said Mayhew when asked if he was concerned about the discrepancy. “Hospitals are working collaboratively with other community health partners to support the timely distribution of vaccines.”

Although states are overseeing the vaccine delivery process, many state health departments or governor offices have left actual vaccine administration to the specific hospital, long-term treatment unit or pharmacy scheduled to receive the shipment. This decentralized structure can cause some delays in learning weaknesses in the process.

Mississippi health officer Dr. Thomas Dobbs explained during a news conference on Tuesday that it was not the state’s job to ensure that vaccines really went into people’s arms once they were allocated to health care facilities. long term.

“They didn’t start vaccinating,” said Dobbs, referring to long-term care institutions, “but we’ve released enough money for them to start, so they’re in the process of getting it. And you know, this is something that’s out. of our control. But, you know, in the next few weeks they’ll make it happen. “

Dr. Ashish Jha, dean of the Brown University School of Public Health, said he is not surprised by some of the initial problems with the vaccine’s launch.

“It’s a little frustrating because it’s not like we don’t know that vaccines are coming,” he told Kate Bolduan of CNN on Monday.

“It will be a little slower – again, better planning would have taken us faster, but here we are and we are going to distribute these vaccines as quickly as possible to the right people,” he said.

Dr. Georges Benjamin, executive director of the American Public Health Association, is more optimistic about the launch, saying that it has so far been “reasonably well”. He hopes the new Biden government is thinking about how to send accurate numbers to states to set expectations for Americans about when life can go back to normal.

“It is not in our interest to have these multiple estimates of when it will reach the rest of the population, because I don’t think you can do good planning that way,” Benjamin told CNN. “I hope the new government is sitting and thinking about the messages, so that people don’t have any hopes of being vaccinated.”

That said, vaccines were developed in record time, without the normal “bureaucratic pace”, said Benjamin. He believes that this process has given Americans a new exposure on what the vaccine development process is like.

“The American public is getting a good sense of the vaccination process they’ve never had before, and I think people should pay close attention to that, when people talk about what public health does, this is an example of what we do” said Benjamin.