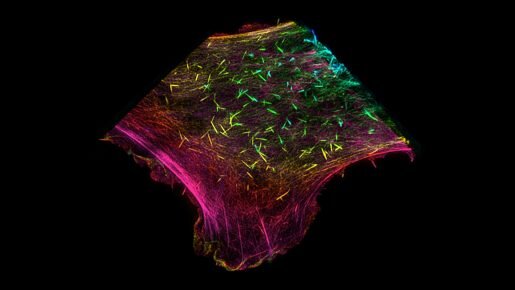 SETD2 is a protein known as chromatin remodeler, which helps turn genes on and off by modifying histone proteins in the cell nucleus. When researchers found that SETD2 was mutated or lost in several types of cancer, the most common type of kidney cancer called clear cell kidney cancer, all eyes were turned to SETD2 function in the cell nucleus to explain these cancers.

2016. laboratory of dr. Cheryl Walker, director of the Center for Precise Environmental Health at Baylor School of Medicine, made the unexpected discovery that SETD2 not only rearranges chromosomes in the nucleus, but also microtubules of cytoskeleton outside the nucleus. The cytoskeleton is a dynamic network of interconnected thread-like protein structures, including strands and microtubules that extend through the cell. It gives the cell shape and internal organization and provides mechanical support that allows cells to perform essential functions such as division and movement.

The Walker team found that SETD2 labeled cytoskeletal microtubules with a methyl group. The loss of SETD2 resulted in incorrect chromosome delivery and problems with daughter-cell separation during cell division.

“Our findings suggested that defects in SETD2 can not only affect gene expression but also cytoskeleton-controlled functions, such as movement, metastasis, and migration, which are very important for cancer cells,” Walker said. “We wondered if SETD2 could target other cytoskeletal proteins.”

SETD2 works with Huntingtin and actin to regulate cell migration

Actin proteins, which make up the cytoskeletal filaments, have emerged as a major target for SETD2. Two recent papers from Walker’s lab have now revealed the role of SETD2 in modification of the actin cytoskeleton and its implications on two important functions of cancer cells, cell migration and autophagy.

One of the first discoveries was that SETD2 interacts with the actin cytoskeleton and is capable of modifying actin in cells or in reactions using purified proteins. SETD2 adds three methyl groups to the actin at a site called lysine-68. Interestingly, they found that SETD2 interacted with two other proteins to methylate actin in cells: Huntingtin (HTT) and the HIP1R actin binding adapter.

“These findings were very exciting because, to our knowledge, no one has investigated the significance of the SETD2-Huntingtin interaction that has been known for more than two decades,” said first and co-author Riyad Navroz Seervai, MD. . a student in a medical scientists training program who earned a doctorate thesis in Walker Lab. “The list of papers on Huntingtin’s participation in actin dynamics and cell migration is limited, but sufficient to continue SETD2-Huntingtin-actin.”

Together, these data provided a new understanding of how defects in SETD2 and HTT can trigger disease by disrupting cytoskeletal methylation and defects in cell migration. The researchers were also able to manipulate the SETD2-HTT-actin axis to show that the changes in cell migration were specific to this new target, SETD2 (actin), and not to chromatin or microtubules.

Read all about this paper in the journal Scientific progress.

The role of SETD2 in autophagy

The group also investigated the impact of SETD2 on autophagy, a mechanism used by cells to remove unnecessary or non-functional components.

“Dr. Walker’s lab has extensive experience and expertise in studying autophagy,” Seervai said. “There was always a suspicion that SETD2 might be involved in this process, but it has not been tested. This project started once we performed initial experiments by looking at autophagy markers and finding differences between cells with functional SETD2 and those without it.”

As they discovered during a study of cell migration, impairment of SETD2’s ability to methylate actin to lysine-68 caused deficiencies in actin polymerization. In autophagy, impaired actin polymerization altered the interaction of actin with other proteins called WHAMM. As a result, the cells had autophagy defects. Significantly, there were no changes in the expression of any autophagy-related gene, suggesting a role in the modification of the SETD2 cytoskeleton rather than in its chromatin function.

“Actin modifications, such as the addition of methyl groups described here, have been aptly termed ‘Cinderella’s cytoskeleton’ and have only now been recognized as key regulators of cytoskeletal dynamics,” Seervai said. “But our findings and the findings of other groups are changing this perspective. More researchers are expressing interest in this new aspect of cytoskeletal regulation and we expect new discoveries that point to potential new therapies for conditions involving cytoskeletal defects.”

Seervai was also involved in the organization of a special interest subgroup at the ASCB / EMBO Cell Bio 2020 virtual meeting on post-translational cytoskeletal modifications, including actin and tubulin. “We had almost 300 people, including the president of the ASCB, at our session this year. From what I’ve heard, this is a sign that things have turned around on the ground since such a session was first organized a few years ago.”

Provided by Baylor College of Medicine