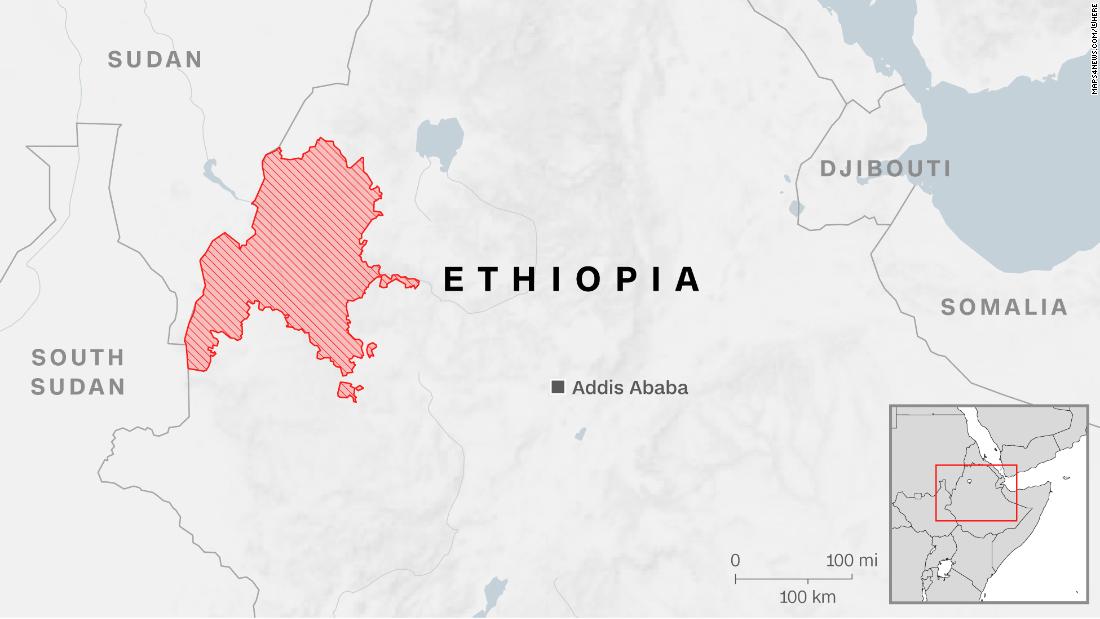 The attack took place in the village of Bekoji, in Bulen County, in the Metekel area, the state Ethiopian Human Rights Commission said in a statement, an area where several ethnic groups live.

Ethiopian Prime Minister Abiy Ahmed said on Thursday that he had deployed forces to the western region of Benishangul-Gumuz.

“The massacre of civilians in the Benishangul-Gumuz region is very tragic,” said Abiy on Twitter. “The government, in order to solve the causes of the problem, mobilized the necessary force.

Elsewhere in the country, Ethiopia’s military has been fighting rebels in northern Tigray for more than six weeks in a conflict that displaced about 950,000 people. The sending of federal troops there has raised fears of a security vacuum in other restless regions.

Ethiopia is also battling an insurgency in the Oromiya region and faces security threats from Somali Islamic militants along its porous eastern border.

Gashu Dugaz, a senior regional security officer, said the authorities were aware of the Benishangul-Gumuz attack and were verifying the identities of the attackers and the victims, but gave no further information.

The region is home to several ethnic groups, including the Gumuz people. But in recent years, farmers and entrepreneurs in the nearby Amhara region have begun to move to the area, leading some Gumuz to complain that fertile land has been taken.

Some Amhara leaders are now saying that part of the land in the region – especially in the Metekel area – rightfully belongs to them, allegations that have angered the Gumuz people.

“In previous attacks, it was people from the ‘forest’ who were involved, but in this case, the victims said they knew the people involved in the attack,” the human rights commission said in its statement.

Belay Wajera, a farmer in the western city of Bulen, told Reuters he counted 82 corpses in a field near his home after Wednesday’s operation. He and his family woke up to the sound of gunshots and ran out of their home while the men shouted “get them,” he said. His wife and five of his children were shot dead, he was shot in the buttocks while four other children escaped and are now missing, Wajera told Reuters by telephone on Wednesday night.

Another resident of the city, Hassen Yimama, said armed men invaded the area at about 6 am local time. He told Reuters he counted 20 bodies in a different location. He grabbed his own gun, but the attackers shot him in the stomach.

A local doctor said he and his colleagues treated 38 wounded, most with gunshot wounds. Patients told him about relatives who were killed by knives and who snipers set fire to houses and shot people trying to escape, he said.

“We were not prepared for this and we are out of medicine,” a nurse from the same institution told Reuters, adding that a five-year-old child died after being transferred to the clinic.

The attack came a day after Abiy, the military chief of staff and other senior federal officials, visited the region to call for calm after several deadly incidents in the past few months, such as an attack on November 14 in which snipers shot a bus and killed 34 people.

“The enemies’ desire to divide Ethiopia along ethnic and religious lines still exists. That desire will remain unfulfilled,” Abiy tweeted on Tuesday, along with photos of his meetings that day in the city of Metekel, near where the November 14 attack.

He said residents’ desire for peace “overcomes any divisive agenda”.

Ethiopian Prime Minister Abiy Ahmed said on Thursday that he had deployed forces to western Benishangul-Gumuz, a day after gunmen killed more than 100 people in the area, which witnesses regular ethnic violence.

On Wednesday, the state Ethiopian Human Rights Commission said gunmen killed more than 100 people in an attack at dawn in the village of Bekoji in Bulen County, in the Metekel area, an area where several ethnic groups live.

“The massacre of civilians in the Benishangul-Gumuz region is very tragic,” said Abiy on Twitter. “The government, in order to solve the causes of the problem, mobilized the necessary force.